In February of 2017, Nine Circles launched a new campaign aimed at increasing STI testing among young adults, aged 18-29. The Euphemism Campaign was developed over several months by a team that included Nine Circles’ STI Testing Nurses, the Health Education/Health Promotion team & the Community Engagement Coordinator. We brought in Kik Innovation to do the design, and the end result is a bar campaign that includes posters, coasters and social media elements. The campaign is currently being featured in 15 bars and lounges around Winnipeg, on social media, and in campus and free daily newspapers.

As part of the process, we conducted a market test with 100 people in our target age range. The response to the campaign has been overwhelmingly positive, and we made some adjustments based on the feedback we received. Here’s a summary of what people thought of the campaign:

Have a look at the campaign elements and feel free to share them with your networks. We will likely do another run of the campaign in the summer around Pride, so if you’re interested in using the posters or coasters at your organization or business contact us for more info.

To find out more about STI testing, visit  Testing & Treatment 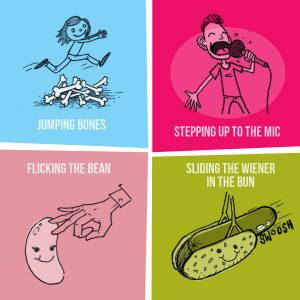 Thanks to our market test participants, the Public Health Agency of Canada’s AIDS Community Action Program and the private donors who supported the development of this campaign. Thanks also to our participating bars & lounges: Fame, Club 200, Wee Johnny’s, The Cavern, The Legion on River, The Marion, The Goodwill, The Handsome Daughter, UMSU – The Hub & Degrees, The Nob, Flea Whiskey’s, The Green Briar, The Spike, The Park Theatre and Bar Italia.

For interviews and other media inquiries please contact the following:
Community Engagement Coordinator or Executive Director
Via Email or
General Line: (204) 940-6000